PONTUS J. BACK- Rock Force One

Finland, much like its neighbor Sweden, is home to more than its fair share of metal bands, of both the melodic and death metal ilk. But a Finnish bluesman? Never heard of one. Until now, that is. Pontus J. Back has a powerful testimony about how the rock and roll lifestyle just about killed him, before Jesus took control of his life, and he's never been the same. Check his story out on www.rockpastor.com. Rock Force One is Pontus' 5th solo album, and if you've heard The Rex

What are you looking for with the Heavens Metal Magazine website?

Got any ideas? Like what you've seen? Wish we had something more? Tell us.

As each year of our life passes, it seems there are fewer things that surprise us, and even less so are these surprises something good. Then out of the blue comes The Waymaker. In these dime a dozen days of faceless bands, The Waymaker sounds fresh yet familiar, their sound an amalgamation of power and classic metal along with a splash of thrash, highlighted by the very effective use of female lead vocals. Tantalizing to say the least. True professional musician and Narnia ve

Just arriving here is this three song EP from Lilium Vitae, hailing from Brazil. Accordingly, the lyrics are all sung in Portuguese, but the songs are quite enjoyable even if you don’t understand the female-fronted vocals. The music is somewhat difficult to categorize; the immediate comparison is symphonic metal not too unlike Edenbridge, with folk rock influences that remind me a little of Blackmore’s Night, along with a smattering of progressive elements. The songs aren’t o

Come to Pass Releases Debut Album “Revelation 6:1-17” Come to Pass, the slamming death metal project based out of Virginia, has officially released their debut album, Revelation 6:1-17, through their label, The Bearded Dragon Productions. The release, which had been re-recorded after the release of single that was the wrong version, would have been set to release earlier but because of setbacks, the release had been delayed. The album, focusing on the end times outlined withi

The Thlipsis, a thrash metal project formed in 2018, has officially released their debut single, “Darkness Breakout”. The single, which discusses the Tiananmen Square massacre, has been in the works for several years, according to the project’s founder, Hyperion Zhang. Zhang, who also is a guitarist for the band Risen, started the project in 2018 as a thrash metal project, influenced heavily by bands such as Death, Slayer, and Deliverance. Setting a timetable for himself, he 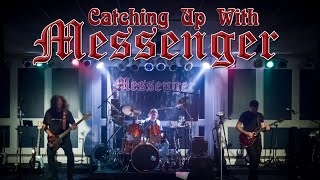 Catching Up with Messenger: Interview Video

Yes, Doug just interviewed Messenger in early June, but let's do a video talk...why not? Jeff got with lead singer and bassist Frank Clifton Herring to further discuss the new music, the forthcoming album, and whatever else that came up. Take a list and enjoy! Visit them at www.MessengerMetal.com and hook up with them on all of the normal social media platforms. Speaking of which, subscribe on YouTube to follow as they releases tracks like these currently available singles fr