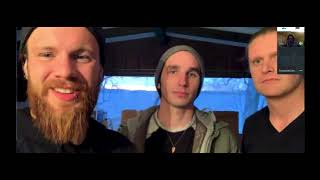 In 2014, I stumbled upon a band from Oklahoma, Chaotic Resemblance, that Oz Fox from Stryper was sharing on social media. They were trying to record their first full-length album by doing a Kickstarter. So, I started following them closely and became a big fan of their music and heart for the Lord. They are one of those bands that will take you back in time to the ’80s when hair metal was big and the music was fun. My favorite thing about them is they always put on a show whe